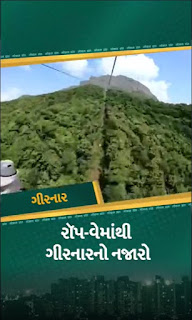 Junagadh has the largest rope-way inauguration program in Asia. The Prime Minister will make an e-launch and give a rope-way gift to the country. Preparations for the program are being finalized. Chief Minister Vijay Rupani will be present at the event at Junagadh. He will also sit in the ropeway and visit the Ambaji Temple. The rope-way trolley is decorated with flowers. A rope-way station has been built to rival even a 5 star hotel. Pictures of the Girnar ropeway station have surfaced for the first time.

After the Statue of Unity, Motera Stadium, Prime Minister Narendra Modi will also unveil the Girnar ropeway tomorrow. In this regard, Deepak Kapalis of Usha Braco Company of Girnar Ropeway Project said that Prime Minister Narendra Modi also unveils what he is inaugurating. The Statue of Unity, Motera Stadium is an example of this. The Girnar ropeway being constructed by Usha Braco is one of the largest ropeways in the country. Usha Braco, who has more than 50 years of experience, has built the ropeway at an estimated cost of Rs 130 crore. Which will be managed and maintained by the company itself. 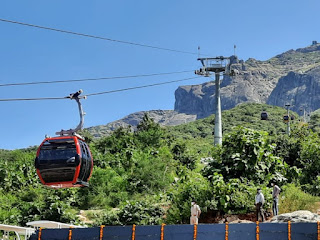 The people of Junagadh are most excited about the Girnar rope-way. Tomorrow, Prime Minister Narendra Modi will make an e-launch. This is the first project of the country to build a rope-way on Girnar by helicopter. The rope-van coach starting at Girnar will pass at a speed of 6 meters per second. The ropeway at Ambaji runs at a speed of 2.75 meters per second. A rope-way trolley built on Girnar will complete a trip in 8 minutes.

It will take 8 minutes to reach Ambaji 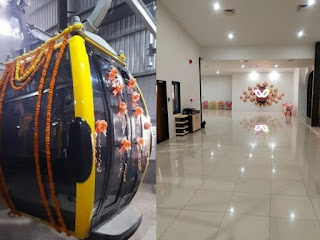 The Girnar ropeway, which is 2.3 km long at an altitude of 900 m above the ground, will take just 8 minutes to reach Ambaji. The Girnar ropeway, which operates at Pavagadh and Ambaji, has enlisted the help of foreign technical experts. This project will develop the tourism sector of Saurashtra. It will save time and energy of the pilgrims. Junagadh Girnar ropeway will soon be the center of attraction in the world tourism map.